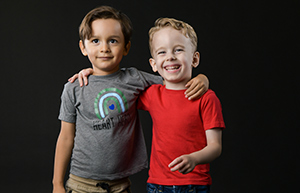 When Carlos grows up, his dream is to care for animals and be a dad.

That's what he told of a crowd of parents at his pre-kindergarten graduation in May.

Now more than two years since his life-saving heart transplant, his mom, Karla, is grateful for the care team at Children’s Health℠ and donor family that gave him a second chance to make those dreams come true.

Because since his transplant, Carlos hasn’t stopped jumping, kicking and flipping like a ninja. And Karla is savoring every moment.

“I used to take so many things for granted,” Karla said. “Now, every moment is special.”

That includes moments like the hug Carlos gave his teacher during his pre-school graduation; his dance moves at his first wedding this spring; blowing out his candles on his fifth birthday surrounded by extended family in Mexico City; and of course, playdates at the park with his best friend Harrison, who has a matching scar down the center of his chest.

In 2020, both boys received heart transplants within months of each other at Children’s Health that saved their lives.

Two years ago, the families met in a break room at Children’s Medical Center Dallas.

Both boys have been cared for by Nathanya Baez Hernandez, M.D., Pediatric Cardiologist at Children’s Health. For Karla and her husband, Johnny, they were grateful to be paired with a physician who could explain Carlos’ diagnosis and complex medical terminology in Spanish, which is the bilingual couple’s first language.

“I loved the fact that Dr. Hernandez spoke to me in Spanish. My English is good, but a diagnosis like that was hard for me to understand,” Karla said. “And Dr. Hernandez gave me hope.”

This fall, Carlos and Harrison will start kindergarten. And while both families’ schedules have been busier with work and school post-transplant, they still make time to celebrate together.

Carlos even shared the story of his unique bond with Harrison with classmates during an “about me” presentation at school.

“He wanted to include a photo of him and Harrison and told his school friends, ‘That’s my best friend Harrison, and he had a heart transplant just like me,’” Karla said. “They know they have this special experience in common.”

Carlos and Harrison don’t have a lot of common interests.

One loves to roar like a dinosaur, go on explorations for insects and read National Geographic books.

The other prefers to shoot his web like Spiderman, kick and jump like the next karate kid and is bilingual, speaking Spanish and English.

But the 4-year-old boys are best friends, united by matching scars down the center of their chests.

Last year, both received heart transplants at Children’s Health that saved their lives. 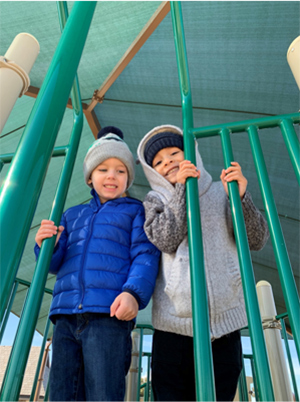 “I owe the team at Children’s Health everything. They gave me my baby back, and they treated him with so much respect and love,” Carlos’ mom, Karla, said. “And Harrison’s family is like our family now.”

The families met last spring in a break room on the 8th floor at Children’s Medical Center Dallas, the flagship hospital of Children’s Health.

Born 15 days apart, the boys received their transplants within two months of each other, and since then, the unique life experience has bonded the families.

“We probably never would have met each other if it wasn’t for this shared experience,” Harrison’s mom, Gabrielle, said. “And since meeting, we’ve been together almost every weekend. We're lifelong friends now.” 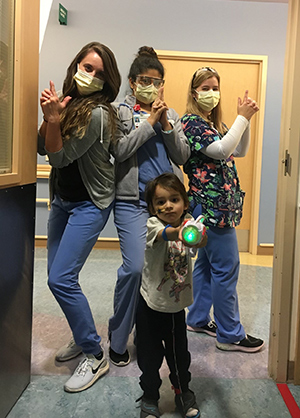 Initially, Karla, and her husband, Johnny, thought Carlos had asthma.

Maybe that’s why his stomach hurt when he walked more than a block, why he’d had difficulty breathing for a year and why his lips turned blue in the bath.

Karla and Johnny took him to a local hospital and visited with several doctors, who eventually diagnosed Carlos with restrictive cardiomyopathy and referred them to Children’s Health.

There, they met Nathanya Baez Hernandez, M.D., Pediatric Cardiologist. She explained Carlos’ diagnosis to Karla and Johnny in Spanish, which is the bilingual couple’s first language.

“I loved the fact that Dr. Hernandez spoke to me in Spanish. My English is good, but a diagnosis like that was hard for me to understand,” Karla said. “But the staff explained everything to us. They told us the truth.”

“And Dr. Hernandez gave me hope.”

She also told them that Carlos needed to be listed for a heart transplant.

Karla and Johnny were shocked. 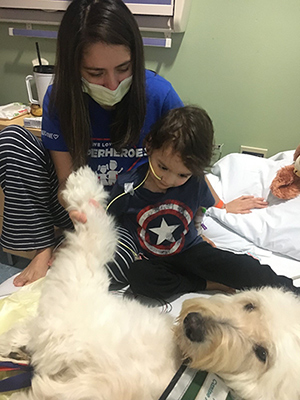 Carlos had never had a serious medical condition. He’d never been hospitalized. And suddenly, they were told they would need to be admitted and remain at Children’s Health while they waited for a heart, since the status of restrictive cardiomyopathy patients can suddenly change.

But amidst the tears and the waiting, Karla found joy in small moments.

A music therapist lent Johnny a guitar to play songs to Carlos in their hospital room.

A fluffy, Goldendoodle therapy dog named Badger came for back scratches and to show Carlos his tricks.

And Karla befriended another heart patient mom, whose son also was waiting for a transplant. Together, the boys drove battery-powered jeeps down the hospital hallways. They played like they were superheroes. And every week, they had a pizza party by the windows.

For a moment, Karla felt like she and Carlos were on a playdate at the park. 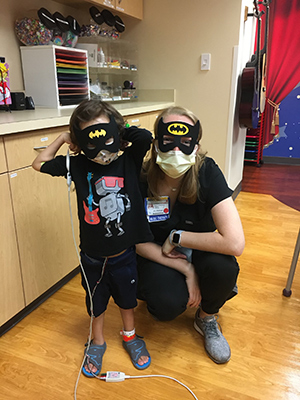 “I thought I was going to be sad all the time, but I wasn’t. Sometimes, I even forgot that we were waiting on a heart,” Karla said. “The team at Children’s Health was so caring, and we met so many people who are now our best friends.”

But as the days went by, Karla worried that a new heart wouldn’t come in time.

“Not everybody on the transplant list makes it to transplant,” Dr. Hernandez cautioned. “And there are so many children waiting on one heart.”

But Karla found support in an online community of other heart patient families, where she received a message from Gabrielle, Harrison’s mom, asking if she wanted to talk.

Harrison has been under the care of Children’s Health team members since 2018, when his parents, Gabrielle and Bobby, relocated from their home in North Carolina to Dallas for Harrison to be treated at the Heart Center.

“We talked for four hours that night. It was like we’d been friends for 12 years,” Karla said.

And the next day, Karla received the call: Carlos’ heart was here.

Carlos ran through the creek, splashing water on his shorts and T-shirt. 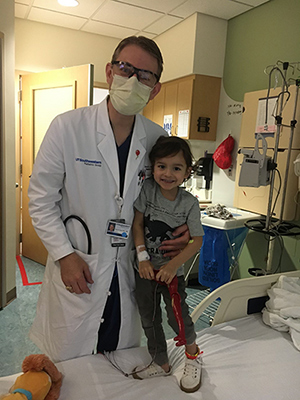 On a warm June morning, a group of family and friends hiked down the shady trail at a neighborhood park to commemorate the one-year anniversary of his heart transplant.

Carlos’ parents and his sister, Isabella, carried rocks painted by his aunt with hearts and rainbows and placed the stones in the shallow creek bed.

“I’m happy and thankful, but I’m emotional,” Karla said, wiping tears from her eyes. “A year ago, everything was so different.”

This park is special because it is one of the first places the family visited last year after Carlos returned home from Children’s Health.

“I was worried then that he wouldn’t be able to finish the hike. That he’d be too tired and want to go home,” Karla said. “But he took off running and hasn’t stopped since.”