Chris sat cross-legged on the tile, a golden retriever stretched out at his feet.

He stroked the dog’s shaggy blonde fur down its back and leaned close to whisper like the two were old friends telling secrets. 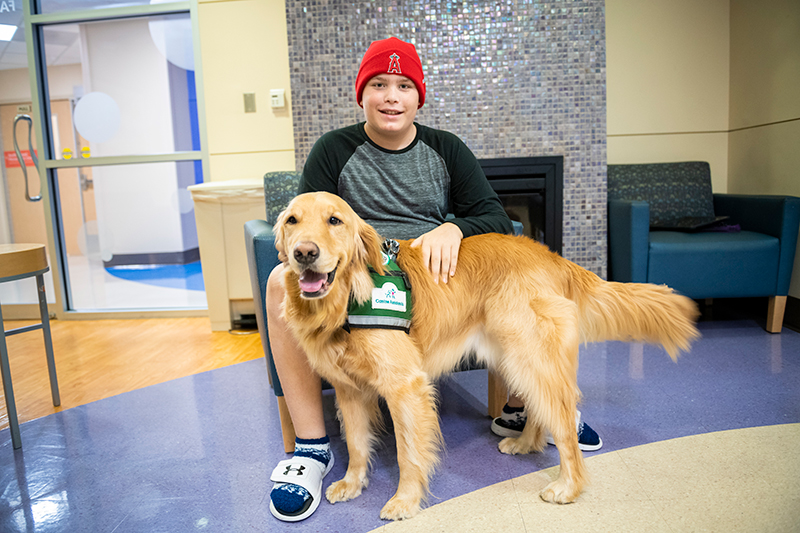 “Are you tired now?” Chris said softly to Espen, a 5-year-old pet therapy dog you can find roaming the hallways at Children’s Medical Center Dallas with his handlers.

Espen, his eyes closed, lifted his front paw and rested it on Chris’ arm as the boy rubbed the dog’s belly.

Launched in 2014 with funding from PetSmart Charities, the Pet-Assisted Therapy Dog program at Children’s Health℠ relies on philanthropic funding and has grown in the last five years largely because of donor dollars from two full-time facility dogs to 11 furry employees like Espen.

The dogs cuddle in patients’ beds when they’re too sick to leave their rooms. They let kids braid their fur and style their coats with hair clips. They play games with patients like hide-and-seek and catch -- which double as physical therapy, speech and occupation therapy exercises. They walk the hallways with kids who otherwise would prefer to stay in their beds.

They make kids like Chris, who was diagnosed earlier this year with Acute Myeloid Leukemia, feel more at home.

“The last couple days, it’s kicked in for Chris that he is sick,” said his mom, Jennifer, smiling as she watched her son pet Espen on the floor. “He’s been spending a lot of time in the room crying. And then once I got him out to walk, and he saw Espen yesterday, he’s been much happier, a different person.”

Like other patient family support programs at Children’s Health, pet therapy does not generate revenue and relies on donations to sustain and grow the program to serve more children, families and staff. Since the program’s launch, nearly $730,000 has been raised for current annual use and $350,000 has been raised in endowed support, which will ensure the program has guaranteed funds for years to come.

But Thresa Belcher, Director of Child Life and Social Work, said the need to maintain the facility dogs and grow the program strategically in the future means pet therapy continues to need donor funds.

“The impact that your dollars and loving support makes is unmeasurable and priceless to the lives of our hospitalized children, their families and our hardworking employees,” she said. “Thank you for believing in the healing power of animal-assisted therapy.”

Research has shown that hospitalized patients exhibited significant decreases in pain, respiratory rate and negative moods, along with a substantial increase in energy level, after spending time with pet therapy dogs, according to the National Institutes of Health. The research also sites a decrease in patients’ anxiety and fatigue and concluded that pet therapy is a low-tech, low-cost therapy that improved patients’ moods and was meaningful to them.

“The impact is system-wide. It’s not just for the patients,” said Espen’s secondary handler Lisa Jones, Music Therapist and Supervisor, Child Life. “You can see when he goes into the patient area, people come out of their rooms. Nurses come out from behind their stations. Everybody’s excited and interacting with him. The whole energy of the unit can change with him walking into it, which is pretty magical.”

Lisa has taught Espen how to play instruments with patients, such as hitting a drum and ringing a bell. And Jane LeVieux, Clinical Manager, Psychiatry and Espen’s primary handler, has taught him how to jump through a hula-hoop like a circus dog and to roll over.

Jane also has taught him patience. When working with kids, she’ll place treats on Espen’s paws and talk to kids about how “things take a while, and you have to be patient like Espen.”

“Sometimes, kids have to wait, and you have to wait. And then when it’s time, you can have your treats,” she said to Espen as he eyed the snacks. 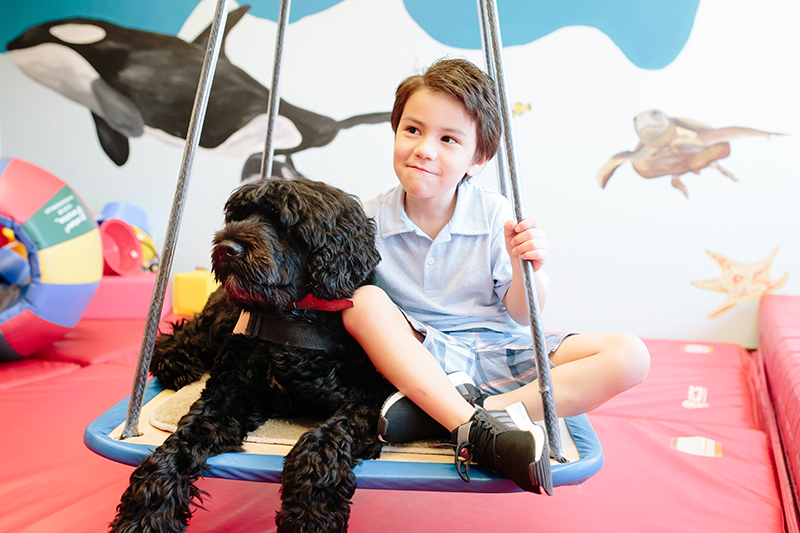 Sara Wilson, Clinical Manager of Rehabilitation and Therapy Services at Children’s Health Specialty Center Grapevine and primary handler of Atticus, said it’s uncommon to find a therapy dog at a rehabilitation facility, but these dogs can do more than cuddle with patients.

“People know dogs comfort and bring down anxiety, but to actually utilize the dog toward treatment goals, people don’t think of it firsthand,” Sara said.

Atticus, a black-haired Portuguese Water Dog, has learned yoga positions and how to paint (but still working on not being so messy, Sara said). He walks on a balance beam with kids and sits on the platform swing with children to help with sensory regulation.

He plays hide-and-seek with patients in rehab lacking motivation to get out of bed. The game encourages them to walk to their hiding spot or find Atticus.

And when 5-year-old Gordy throws a ball down the hallway, as part of a speech therapy exercise to work on action words, Atticus chases after it.

Gordy squeals and jumps up and down as Atticus’ paws slide on the slick tile. 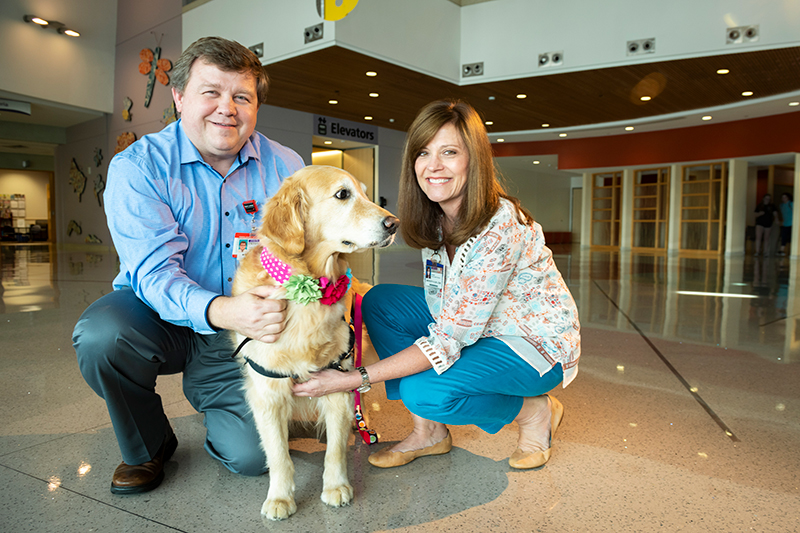 At Children’s Medical Center Plano, Witek Nowosiad, Manager, Pastoral Care and Education, and Meredith Ulon, Manager, Family Support Services, said the addition of Flora – always seen with a flower in her hair -- has livened up the hospital dynamic with her playful and vulnerable spirit since it opened more than a decade ago in Collin County.

Witek and Meredith, Flora’s primary handler, often will bring her to group therapy sessions with their eating disorder patients. Many of the patients will sit on the floor with Flora. Some will inch close, resting their heads on her.

“These patients are so needing of any care, any affection, they’ll literally spoon with her to get that contact,” Witek said.

And as the kids run their hands through the golden retriever’s long hair, Witek will ask them what they like most about Flora.