Gino and Catherine Sabatini stared at the scan of their 17-year-old son’s body that included a mass the size of a fist on top of his heart.

Standing in the Emergency Room at Children’s Health℠, their minds began to race.

“We saw this picture of our kid covered from his neck down with nodules of cancer,” Gino said. “We thought, ‘How can you have a picture like that and live?’”

Their oldest of two children was diagnosed with Hodgkin’s lymphoma in June 2019 -- the summer before his senior year of high school.

For about half-a-year, he was cared for and treated by an army of team members in the Pauline Allen Gill Center for Cancer and Blood Disorders at Children’s Health.

As a tribute to his care team, the Sabatini family – joined by the W.P. Carey Foundation -- surprised clinicians on Dec. 15 during a Zoom call with the announcement of a $1 million donation to establish The Dr. Martha Pacheco and Ruth Anne Herring Fund for the Treatment and Research of Hodgkin’s Lymphoma. 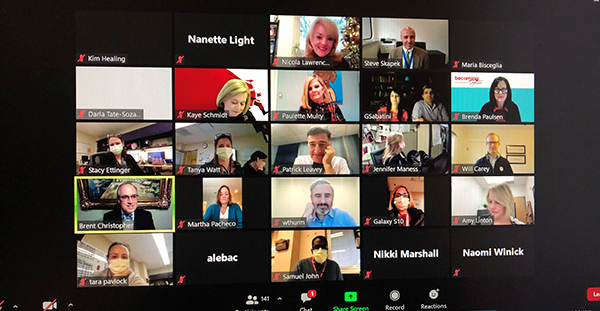 To you, Dr. Pacheco and to Ruth Anne, thank you for your understanding of our son and who he is. You saw that right away. Your straightforwardness in the way you cared for him is what he wanted, and your lightheartedness is what he needed,” Catherine said. “To all of you at the Gill Center who treat families like us, you are extraordinary, and I’m overwhelmed by what you do.”

Caregivers – many masked in PPE at the hospital – applauded while on mute in their tiny Zoom screen squares.

The endowment is named in honor of the son’s physician, Dr. Martha Pacheco, and Pediatric Nurse Practitioner Ruth Anne Herring.

“I’m speechless. We’re fortunate to get to do what we do. Thank you so much. This endowment will make a huge difference,” Dr. Pacheco said.

The symptoms began a year before his diagnosis. There were headaches, rashes, a lingering cough.

Later, while skiing in Colorado, Gino and Catherine’s son developed stomach pain. The couple rushed him to the ER, thinking it was appendicitis.

By the spring semester of his junior year, their son continued to feel worse. And when he landed in the ER at Children’s Health in the summer of 2019, he had a lump in his neck.

Doctors diagnosed him with Hodgkin’s lymphoma – the most common cancer in 15- to 19-year-olds, which accounts for about 70% of childhood lymphoma cases in the U.S. each year.

Gino and Catherine were stunned.

Not from Dallas and unfamiliar with Children’s Health, they asked for their son’s scans to be sent to another pediatric hospital on the East Coast for confirmation.

And while they waited, they began to decide how they would move forward.

“Initially, because we’d never heard of Children’s Health and didn’t know anything about it, we wondered if we should drive down to MD Anderson. Should we go to Memphis to St. Jude? Is Children’s Health the best place in the world? Because that’s where we want to be,” Gino said.

But the Gill Center stood out for its record and experience in treating Hodgkin’s lymphoma patients.

The Gill Center’s Lymphoma Program routinely treats Hodgkin lymphoma, caring for up to 30 newly diagnosed patients each year. Clinicians have experience in every form of childhood Hodgkin and non-Hodgkin lymphoma – from the rarest to the most common. And here, patients can receive the most advanced therapies for childhood lymphoma through participation in clinical research.

“We felt like they’re going to be able to handle whatever happens and take care of our son,” Gino said.

The call came two days after Christmas last year: Their son’s final scan showed no signs of cancer. He was done with treatment.

That day, the family piled in the car and drove to Florida for a vacation. They were anxious to put this chapter behind them.

Treatment during the fall semester of the teenager’s senior year had been like climbing a never-ending mountain: The steroids made him swollen; he lost his hair; he couldn’t play his defensive lineman position on the football team; and he didn’t feel like himself mentally or physically.

But he’d been accepted to his dream college at the University of Texas at Austin, where he is now studying petroleum engineering. He wants to move to Argentina and be an oil man. He wants to travel and explore other cultures.

And his parents want him to never have to deal with cancer again.

“Anything else in life is going to be a walk in the park after what he dealt with last year,” Catherine said.

Overwhelmed with gratitude to Children’s Health for saving their son’s life, Gino and Catherine knew they wanted to give back in some way to the care team that stood alongside them. Once, they offered to buy Ruth Anne dinner in the hospital cafeteria, but she turned it down, saying they didn’t need to pay for her meal.

So, they started thinking bigger.

“Through the whole process, we wanted to thank Dr. Pacheco and Ruth Anne. We knew we wanted to do something for them directly,” Catherine said. “Someone saves your child’s life – how do you even thank them?”