Preston was only a freshman in high school when a surgeon in the emergency room at Children’s Health told him he’d have to remove one of his testicles and a tumor that had caused it to swell to three times its normal size.

“I didn’t have enough time to be scared,” Preston said of the April 2020 event. 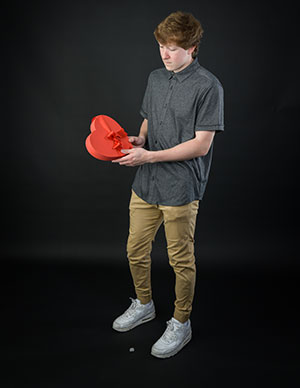 But the surgeon also suspected that the tumor was cancerous, which was later confirmed with imaging by a pediatric oncologist at the Pauline Allen Gill Center for Cancer and Blood Disorders.

Already at stage three, the cancer had spread to lymph nodes in Preston’s abdomen and one lung.

The next thing the pediatric oncologist told Preston was, “You’re going to live a normal life.”

“When your child is diagnosed with cancer, you’re terrified and helpless. But everyone at Children’s Health – surgeons, nurses, oncologists and family navigators – quickly showed me that we weren’t alone,” Preston’s mom, Marie, said. “Because of their compassion and expertise, Preston is alive.”

Preston and his family entrusted his care close to home at Children’s Medical Center Plano, which last fall broke ground on a major expansion to provide more specialized care for families north of Dallas.

“The oncologist talked us through what chemotherapy would be like and emphasized how the Plano cancer team would be an extension of our family,” Marie said. “The comfort and care she gave us at that first meeting really set the tone for our journey.”

Preston was inpatient when COVID-19 precautions were heightened, so his dad, Terry, stayed with him during the day. At night, Marie took over until Terry returned in the morning.

“Inpatient chemo is challenging. But the nurses are by your side and make you feel comfortable when nothing is comfortable,” Preston said.

After almost three dozen rounds of chemotherapy treatments were completed, Preston had surgeries to remove the cancerous lymph nodes in his abdomen and tumor in his lung.

And the following year, once doctors cleared him to start tossing a baseball and going for walks that eventually turned to jogs, he used the time to think.

He thought about how he’d feel if one of his friends were too afraid to tell their parents if they saw or felt something wrong and ended up with a diagnosis that was worse than his. He thought about how his brother supported him and how fortunate he was to live in a time when a stage three cancer diagnosis would rob him of a summer and a baseball season, but not his life.

“When you get cancer, you realize how lucky you are that people dedicate themselves to saving your life,” Preston said. “I tell all my friends not to be afraid to talk about their health.”

Now in his senior year of high school, Preston said he’s thinking about a career in medicine.

“I have this unique experience and understand what kids are going through when they get sick,” he said. “It takes a lot of people working together to help kids like me be healthy again. I want to be part of that team.”