Isacc was 5 years old when Karen and her husband, Brett, met him for the first time.

The then-kindergartener — who loves reading and sports, particularly the Dallas Cowboys — had big brown eyes and a sweet toothy grin.

He’d also recently finished a 25-day stay at Children’s Health℠, where he was being treated for acute lymphoblastic leukemia.

New foster parents, Karen and Brett had been caring for Isacc’s younger brother during his hospital admission. 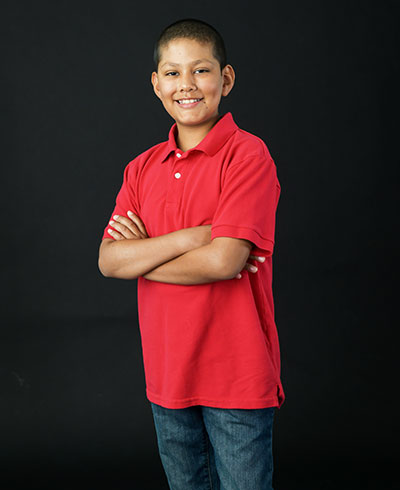 The couple didn’t have biological children, and for years life had been just the two of them. But they had space in their house and their hearts to give children a home, even if only temporarily.

Karen and Brett hadn’t planned to foster two children, particularly one with a serious medical condition. They also knew from their extensive foster training that the goal for the boys was — if possible — reunification with their biological family.

“But then your heart is in it from the get-go,” Karen said. “Once we knew the boys, we loved them from day one.”

Diagnosed with leukemia just before his third birthday, Isacc has been cared for by team members in the Gill Center for Cancer and Blood Disorders at Children’s Health for almost half his life, following a relapse in 2019.

Since then, his clinical care has been overseen by the growing oncology team at Children’s Medical Center Plano. He’s spent about 50 nights in the hospital, had two rounds of radiation and weekly chemotherapy treatments.

“We love everybody on the Plano team because of the care they’ve provided, not just for Isacc, but for our whole family,” Karen said.

In Plano, the family found Child Life specialists who helped him with spelling homework during in-patient stays, and clinicians who chatted about Cowboys football during chemotherapy treatments.

And during a June clinic appointment, Isacc’s care team surprised him with balloons, cake and a Cowboys cap after his and his brother’s adoptions were finalized, officially making Karen and Brett their parents.

“His nurses and doctors didn’t tell me they were doing this. They didn’t ask me, ‘What should we get him?’ They knew what to get him because they’ve spent the last two years treating him, and they know him,” Karen said. “And after spending every week with them, they’re like family to us.”

Isacc also has spent his last two birthdays, Thanksgivings and Christmases at Children’s Health. There, he watched the Dallas Cowboys play on Thanksgiving Day from his hospital bed while eating pie. In December, carolers sang holiday tunes down the hospital hallways, and there were even presents and a visit from Santa.

And this year’s holiday wish: to finish his cancer treatment before Christmas Day.