‘A gift that keeps on giving’

After a pediatric neurosurgeon saved their daughter’s life, John and Jennifer Eagle established an endowment through a gift of $1 million to Children’s Health.

For more than two decades, John Eagle has held onto a doctor’s business card. 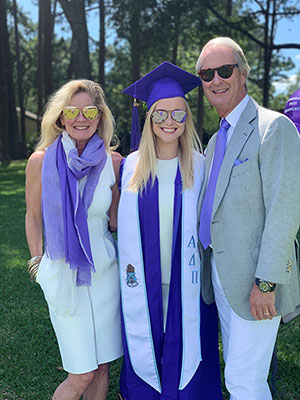 Now yellowed and frayed, the card goes with him everywhere -- tucked in his wallet alongside folded receipts and credit cards.

He plans to keep it forever.

The weathered card is one of his most treasured items -- a reminder of what is possible and the pediatric neurosurgeon who saved his daughter’s life.

“In the business world, I had people all the time tell me they couldn’t do things,” said John, President and CEO of John Eagle Dealerships, who over the years grew the family dealership business to include many franchises in various cities.

“This card reminds me that nothing is impossible, and I don’t ever want to forget that.”

Because more than two decades earlier, Dale Swift, M.D., a Pediatric Neurosurgeon at Children’s Health, was his daughter’s last hope.

Born during an emergency c-section at 24 weeks old, they each weighed 1 pound and 5 ounces.

Because of complications with their premature births, Natalie only lived for about 36 hours, and Alexandra developed hydrocephalus – an abnormal build-up of fluid in the cavities deep within the brain. This fluid build-up puts pressure on the brain’s tissues, and too much pressure can cause brain damage and even death. 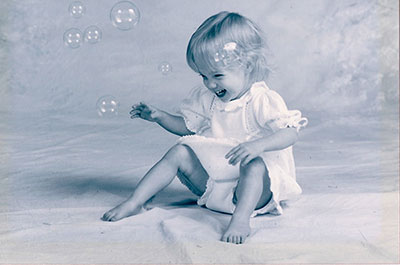 Alexandra needed a tube – also known as a shunt -- inserted surgically to drain the excess fluid. But doctors at another hospital didn’t have the capability to perform the surgery.

And Alexandra was running out of time.

The Eagles were quickly introduced to Dr. Dale Swift, part of the Neurosurgical team at Children’s Health and Associate Professor at UT Southwestern Medical Center, who a few weeks earlier had welcomed a baby boy of his own.

He told John and Jennifer that he had never inserted a shunt in a baby this small before, but he was confident that it was the best path -- the only path -- for their daughter.

But there were risks: Alexandra could develop an infection from the shunt, which could damage her brain. And the shunt could malfunction, and her hydrocephalus could return.

“For Alexandra to have any kind of life, we knew this is what we had to do,” John said. “And immediately after the surgery, she came off the ventilator, and that gave us a lot of hope.” 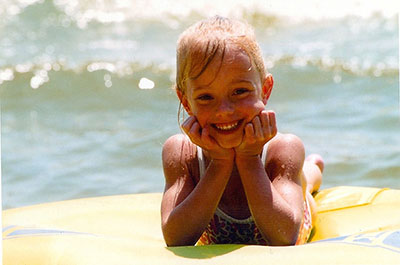 Soon after, Alexandra was gazing up at her parents with bright eyes. And she was gaining weight, too. By the time the Eagles brought her home from the hospital, she weighed 3 pounds and 12 ounces.

A little butterball, they thought.

But as they headed home, they also were anxious. They wondered how Alexandra’s condition and surgeries would impact her as she grew up.

“I’ll never forget it,” Jennifer said. “Dr. Swift sat down on the floor in front of us and said, ‘The brain is a beautiful thing. Just take her home and love her.’"

In Dr. Swift’s office at Children’s Health, a bulletin board nearby his desk is tacked with notes from families – hand-drawn cards from kids, holiday and New Year’s cards with smiling faces and graduation announcements of teenagers in caps and gowns.

He’s gotten to watch a lot of kids grow up, including Alexandra, who attended the same school as his children.

He watched her cross the finish line in track and cross-country races, and he saw her walk across the stage at her high school graduation. 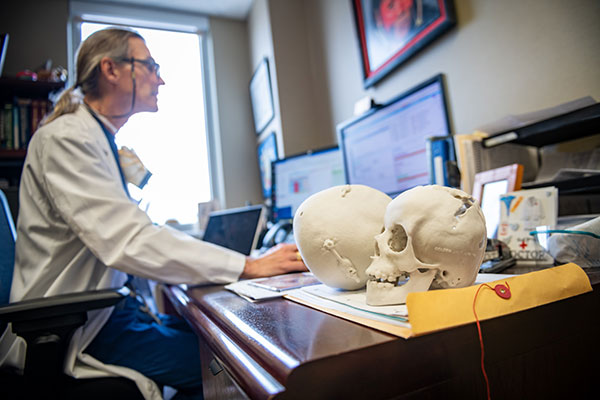 “I’m extraordinarily proud of her accomplishments,” Dr. Swift said. “And in the back of my mind, I’m always thinking that we’re very fortunate she did not have any more problems as a little baby.”

In 2020, Alexandra graduated from Texas Christian University with a degree in art history. Since then, she’s completed a master’s degree at the Sotheby’s Institute of Art in New York and is currently writing her thesis. She continues to be monitored by Dr. Swift and even has his cell phone number to call if she notices any issues.

Grateful to Dr. Swift for saving their daughter’s life, the Eagles gave $1 million to Children’s Health to establish the Eagle Family Endowment Fund in honor of Dale Swift, M.D.

Dr. Swift is the first to benefit from this generous gift as the holder of the Eagle Family Master Clinician in Pediatric Neurosurgery, which provides him annual funds to advance projects and research in pediatric neurosurgery.

“After Alexandra was born, it was a pretty dark picture, but Dr. Swift painted us a picture of hope,” John said. “He really instilled in us complete confidence – not only in his abilities, but in what he was going to do. He changed our lives.”

Dr. Swift plans to use these funds to research and develop an alternative to current hydrocephalus treatment that wouldn’t involve a shunt, since a shunt is prone to failure and the current alternative treatment does not work in all cases.

“We wanted to give a gift that keeps on giving, and, hopefully, make a difference that can help other families,” Jennifer said.