Christian Makes a Difference for Children through Fundraising and Tech Work 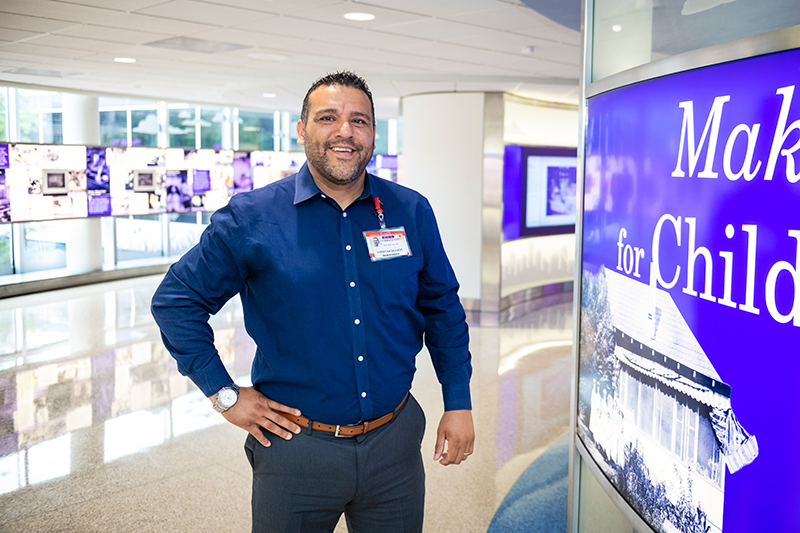 Christian Salcedo is a handshake guy, extending firm ones down hospital hallways to everyone he knows.

And after working at Children’s Health℠ for almost two decades, Christian, Informational Services Project Lead, knows a lot of people.

There’s the guy in housekeeping who told Christian that Children’s Medical Center Dallas is where he lost his son and works here now because the hospital is where he feels closest to him.

There’s the doctor who treated Christian’s son for a gastrointestinal issue when he was a toddler and still asks how the now-teenager is doing.

In April, Christian handed out his signature handshakes alongside 300 donated chocolate and vanilla cupcakes topped with thick red icing during a fundraiser at Children’s Medical Center Dallas for his Red Balloon Run & Ride team. He has overseen the Run IT team as captain for the last three years, after recovery from a car accident that kept him away from work for months spurred him to give back.

“I was always a positive person, but the accident changed my life,” he said. “I’m thankful to be healthy. It made me appreciate my health and want to help other people.”

Christian works on the Customer Services team at Children’s Health. He’s not on the frontlines of patient care, but he’s the guy who helps gets equipment ready for new employees throughout the hospital system and who coordinates the technology for fundraising events to raise money for patient care.

He also helped arrange for the equipment to launch Children’s Medical Center Plano a decade ago, stocking it with computers, telephones and printers.

“In IS, we’re not just computer guys. We’re part of Children’s, and we want to support the kids,” Christian said. “We’re a big group of talented people with big hearts.”

Born and raised in Peru, Christian immigrated to the United States when he was 20 to join family living in Texas.

The move meant leaving behind his studies in business administration. But in the U.S., a job at a call center -- where he was trained to work as a traffic controller -- piqued his interest in computers.

“When I moved here, I became more curious about what was out there for work,” Christian said. “Now, I have four kids. I built my life here.”

Christian worked at Children’s Health as a contractor before he was offered a job as a full-time employee in Informational Services.

His job gives him an aerial perspective of the hospital system, sending him regularly to different campuses and facilities, meeting new people.

“Working at Children’s Health, you see the people and the passion they have to help the children. Every single department in the hospital is dedicated to the children,” Christian said. “I feel proud to work here so I want to give something back.”