In 1987, civil war drove an estimated 20,000 young boys from their families and villages in southern Sudan. Most of them just 6 or 7 years old, they fled to Ethiopia and walked more than one thousand miles to Kakuma refugee camp in Kenya. The survivors of this tragic exodus became known as the Lost Boys of Sudan.

In 2001, close to four thousand Lost Boys came to the United States seeking peace, freedom and education. The International Rescue Committee helped hundreds of them to start new lives in cities across the country. 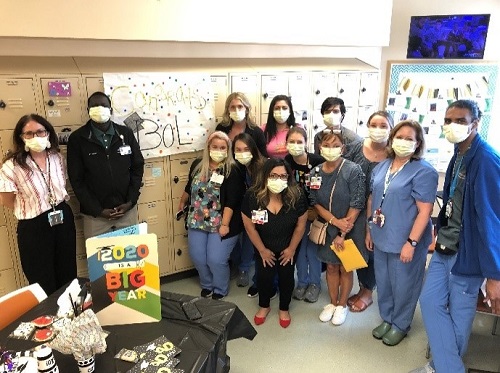 Bol was one of those boys. Born in 1980, Bol grew up in Aweng Village in Ethiopia and made it to the United States in 2001. In 2014, Bol was bagging groceries when a gastroenterology nurse from Children's Health in Dallas needed help to her car. While providing assistance, Bol expressed his desire to work for the pediatric healthcare system. Later that year, he found himself with a second family in the inpatient GI unit as a health unit coordinator.

This spring, Bol was scheduled to become the first person in his family to graduate with an undergrad degree, but UT Dallas graduation was canceled due to COVID‑19. When his GI team members learned of the disappointing news, they surprised Bol with a full team graduation celebration at Children's Medical Center Dallas. Bol was beyond excited and overjoyed and couldn't wait to call his parents. He is grateful to have such a loving and caring family at Children's Health and says his surprise graduation was one of the best days of his life.