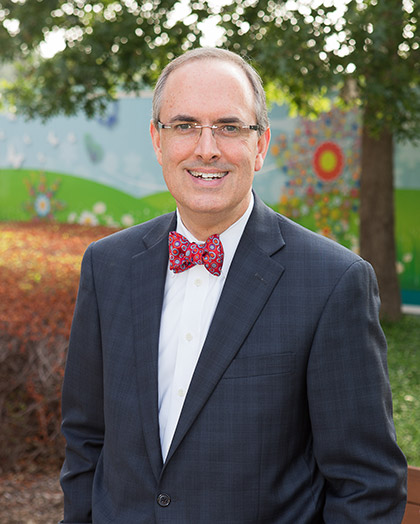 On the lower level of the mansion, there was a trampoline room with padded walls and a springy floor.

And Brent Christopher was alone.

But a trampoline room? Not what you’d expect.

Brent looked left and looked right. And in his suit and signature bowtie, he jumped.

“And I’m sure there was some security guard somewhere laughing at me at that moment,” he said.

Known as the mastermind behind the original North Texas Giving Day and the “guy with all those bowties,” Brent has built a career around taking leaps.

A former trial lawyer at Cowles & Thompson, PC, he left his law career for the nonprofit sector and is now one of North Texas’ most prominent philanthropy executives.

Since July 2016, he has steered the philanthropic efforts of the Children’s Medical Center Foundation, the fundraising arm of Children’s Health℠.

While at the helm of Communities Foundation of Texas, he launched and helped grow North Texas Giving Day into a fundraising movement that has become one of the largest community-wide giving events in the country. In 2018, people donated more than $48 million to benefit 2,700 local nonprofits.

His tenure at Communities Foundation of Texas also included the launch and expansion – with the backing of the Bill and Melinda Gates Foundation – of the statewide education initiative Educate Texas, focused on strengthening the public and higher education system.  At one point, it was the largest single education grantee of the Gates foundation.

But Brent wasn’t a stranger to Children’s Health when he took over fundraising at the country’s eighth largest pediatric health care system. Earlier in his career, he helped lead development efforts at a then-smaller Children’s Medical Center Foundation before his more than decade-long run at Communities Foundation of Texas.

As the president of the Children’s Medical Center Foundation, Brent is focused on making the organization a leading cause-of-choice in the North Texas region. That includes helping the community understand how philanthropy can impact a not-for-profit health care system; developing the Foundation’s staff and investing in talent to raise money consistently across a broad spectrum of donors; and expanding the Foundation’s pipeline of donors.

“A pediatric hospital anywhere ought to be one of the go-to charities in a local community that everybody knows about, cares about and has an opportunity to support,” Brent said.

Sign up for our monthly digital newsletter to receive the latest headlines and highlights of philanthropy at Children's Health.